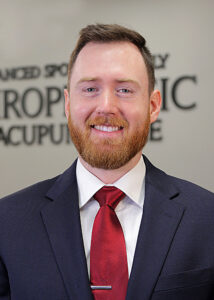 Dr. John McNeely was born in Tallahassee, FL, but raised primarily in the Kansas City, KS area. While in high school at Shawnee Mission East, Dr. John was a member of the Cross Country team and track team where he competed in the 800m run and javelin. During his Junior year he developed lower back pain and sciatica down to the knee of his right leg, likely caused by weight training. He dealt with the pain for about 6 months before seeking the care of his family Chiropractor and a physical therapist. Over the course of a few months the symptoms started to resolve, but left him unable to compete in his senior year of athletics.

After graduating high school Dr. John attended The University of Kansas for his undergraduate degree where he received a Bachelors of Science in Organismal Biology in 2011.

Due to his experience with chiros and physical therapists in high school he was attracted to both of those professions when looking at post grad options. As graduation was approaching he made the decision to attend Cleveland University – Kansas City for his Doctorate in Chiropractic. While at Cleveland, Dr. John was a member of several student clubs focused on developing palpation and adjusting skills. He also sought out many seminars outside of school to further develop his skill set. He attended many seminars from the Motion Palpation Institute, and became certified in FAKTR, SFMA, Rock Tape, ART, and DNS therapies. Dr. John graduated from Cleveland University – Kansas City with his Doctorate of Chiropractic in 2016.

Following graduation from Chiropractic school Dr. John moved to Europe for two and half years where he practiced locally around an American/Polish military base. While in Europe he was able to visit many different countries and experience the variety of cultures Europe has to offer. In January 2019, Dr. John moved to Arizona to be closer to family. Once in Arizona Dr. John joined a sports oriented clinic where he had the opportunity to work with many professional athletes from olympic runners and swimmers, to NFL and MLB stars.

Now that Dr. John has returned to his hometown of Overland Park, KS he is excited to bring his skillset to the Advanced Sport and Family Chiropractic and Acupuncture office in Belton, MO.