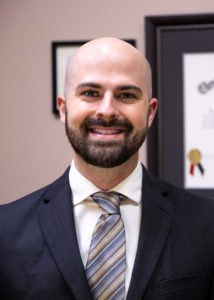 Dr. Anthony Sala is a graduate of Cleveland Chiropractic College in Kansas City, as a Doctor of Chiropractic with a Bachelor’s of Science in Human Biology. He initially experienced chiropractic care after enduring a knee injury as a high school soccer player. After visiting his chiropractor, the knee pain was resolved and he resumed playing sports. More importantly, he was introduced to the positive nature of a healthy, prevention-based lifestyle.

While attending Chiropractic college, Dr. Sala began to pursue a rigorous weight-lifting and exercise regimen, and has since developed a strong passion for assisting athletes of all ages and abilities to achieving their performance goals. As an Eagle Scout, he also enjoys all manner of outdoor activity, such as hiking, camping, canoeing and rock climbing.

After graduating from Cleveland, Dr. Sala attended an extended preceptorship under his mentor in Gladstone, Missouri and was able to see first-hand the power and value of chiropractic on a large scale everyday! After practicing in Platte City, where he graduated high school, he is now ready to take his skill set on to the next challenge, continuing to grow and help even more people to experience the power of chiropractic and positive health.

We are looking to add a TEAM member to our Overland Park clinic. We are hiring for a Full-Time patient care coordinator!

The Key is you MUST APPLY IN PERSON! We want to see how awesome you are!

This is an excellent opportunity for a person passionate about loving people and helping others reach their health and wellness goals.

You will be working with an AMAZING team of doctors and staff while having FUN while you work! If this sounds like the career you’re excited to learn about, we will train you! APPLY TODAY IN PERSON! ... See MoreSee Less

⭐⭐⭐⭐⭐
"Rebecca Wardwell - Outstanding service from the minute I walk in. Dr. Sallee knows his stuff. The staff are pleasant and eager to work out any issues with scheduling."

Dr. Aaron Beck, DC
We love Dr. Beck! We are so lucky he has been part of our team for 3 years and counting. Dr. Beck has always had a passion for helping others. As a kid, he saw how chiropractic changed his step father’s life, and decided that it was how he could help the most people! He graduated from Logan College of Chiropractic in St. Louis & his desire to continue learning led him to achieve his Masters in Nutrition, as well as becoming a Fellow of the Acupuncture Society for America.

Here are some fun facts!
🏌🏼 Favorite Hobby: Golf
📺 Favorite TV Show: This was a tough one, but “Two & a Half Men”
🎺 Hidden Talent: He plays the trumpet!

We just received another great review on Yelp:

⭐⭐⭐⭐⭐
"This the greatest place to get your back adjusted. Best friendly staff in the field."