The Dangerous Epidemic of “Text Neck”

A recent study shows that nearly 80% of the population between ages 18 to 44 keep cell phones with them almost every waking minute. Most estimates showing only having two hours a day without their phone in or near their hands. The stress of constantly looking down at a phone or device creates a dangerous condition known as “tech neck”. Body and spinal design do not come equipped with enduring the constant and sustained neck pressure. The need for chiropractic care continually grows as more people of all ages realize the imperative need to preserve the health and quality of life for both themselves and the next generation. 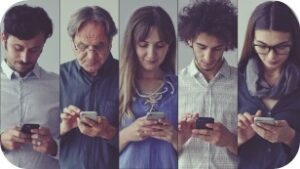 According to a 2017 study titled “Text Neck” published in the Spine Journal, spine surgeons noted a significant rise in the number of patients complaining of neck and upper back pain. Many of the patients were children. The research showed that “text neck” added extreme amounts of pressure and tension on the spine as the head position extended forward and downward to look at an electronic device. The average head weight on the neck amounts to between 10 to 12 pounds when resting in a neutral position. Any forward head flexion will add weight and pressure to the spine at varying degrees. Every 15 degrees of forward neck flexion adds between 9 and pounds of pressure on the spine. 60 degrees of forward flexion creates an extra 60 pounds of pressure on the spine. Neck flexion varies between 45 and 60 degrees when texting. A new diagnosis code called “text neck” has been established to categorize and address the damage incurred by common daily activities like using electronic devices.

When this happens, it's usually because the owner only shared it with a small group of people, changed who can see it or it's been deleted.
View on Facebook
·Share

We love cold laser at ASFCA!
🧐 Did you know it may help heal a broken wrist faster by increasing blood flow. Ask Dr. Beck for more details. ... See MoreSee Less

Hey, Dr Beck!! One of my favorite Chiropractor!!! Good to see you!!